We are please to offer two St. Patrick’s T’s and a snap back Hat this year.. A soft cotton/polly next level T in Kelly Green and a 100% cotton Ringer T. The Ringer T is a “Limited Edition”, so when it sells out it will be gone!  Our Hat is the same blank that we have been running in the black/white snap back. Mid rise front mesh back and fully adjustable.

All are available online and in the shop!! 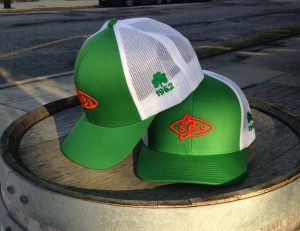 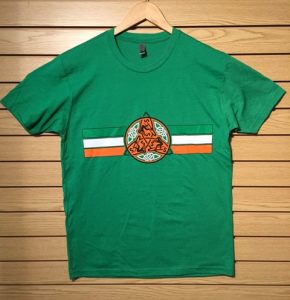 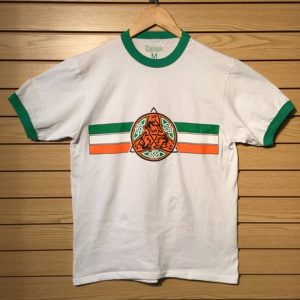 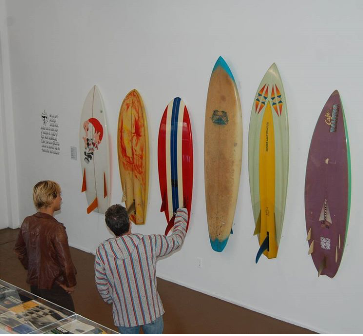 Check out the short video, link below of opening night celebrating “The Bonzer”

Look for plenty of Bonzers on the sales floor this Spring and Summer.. Both Original Campbell Brothers Bonzer and Channel Island Bonzer Co-lab 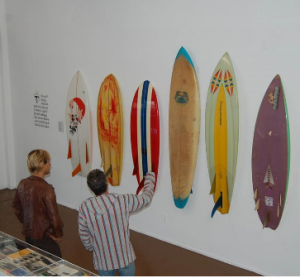 We are excited to announce the launch of our new Surfers Supplies App.  Stay connected and download our NEW app and get alerts on Special Savings like… Our Gift Certificate Sale going on NOW!  Stay up to date on surf forecast/alerts, have easy access to our online store, social media and check in to our wave cams! 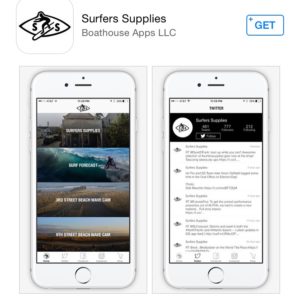 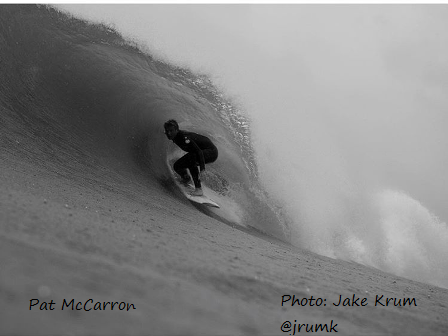 We are looking at a good sized pulse of ENE swell for Election Day and into Wednesday!  A strong Low Pressure system is spinning over the Western Atlantic and interacting with High Pressure over the NE Sates.  If you look at the Buoy forecast for the 8th below you will see the solid blue line peaking above 6′.  The red dot above represents the swell period.  You can see that through the early afternoon Tuesday we will see the swell peak 6′-7′ at 12 seconds.  Through Wednesday we can see the swell height decrease while the swell period holds just below 12 seconds.. So, the next two days we will see a solid shot of ESE swell hitting the area beaches.  With WNW winds forecast conditions should be clean.. 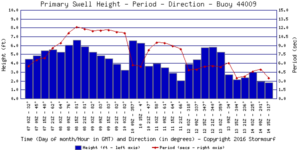 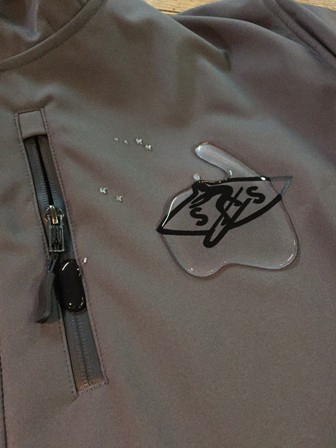 Expanding on our Poly-Tech offering this water resistant and wind resistant soft shell jacket offers everything you could want in a jacket to protect you from the elements.  The soft polyester water proof exterior keeps the weather out, and the interior is bonded with a Micro Fleece lining for comfort and warmth.  The Micro Fleece interior wicks moisture to keep you dry and warm. This jacket features a scuba hood for good coverage, water resistant zippers with interior flap to keep the wind out, welt pockets, drawcords with toggles at hood and waist.

Hurricane Nicole is forecast to move very little over the next several days…  We are expecting a shot of swell 3’+ @ 11 seconds Saturday.. So look for wave heights in the 4′ zone..

Another shot of swell from this storm is expected Wednesday/Thursday next week..

I don’t think I have even seen a storm track quite like this one before… We are not expecting any swell from this crazy storm.. 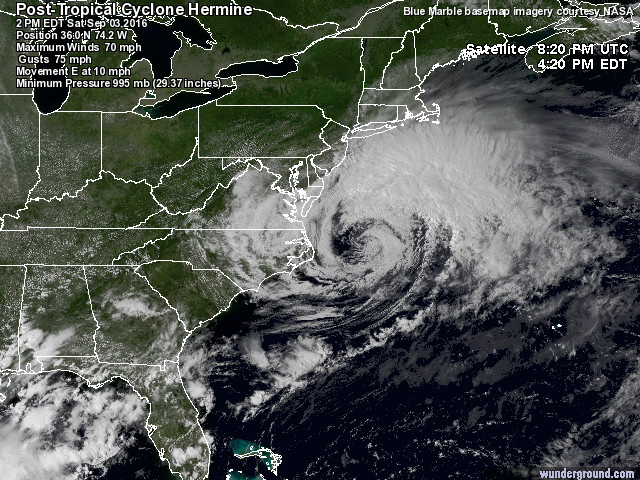 This storm is forecast to linger off the Jersey Coast for several days… Through the next 48 hours our beaches and local community will be dealing will gusty winds, heavy surf and more than likely some flooding.. If your street is prone to flooding you will want to move your vehicles…  Sunday nights High Tide, 10:00pm or so and Monday mornings tide will be the ones to look out for.. The surf may begin to come together some Monday as the winds bend more NNW but still gusty, their will be a few spots doing their thing… Tuesday/Wednesday look pretty good both wind and surf 6′-7’+ and pretty clean…

Stay Safe if you choose to venture out.. 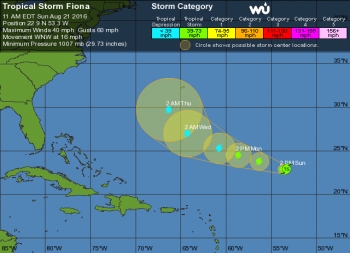 The Tropics have finally come alive as we head into the last two weeks of August… Tropical Storm Fiona is trying to hold herself together as she encounters some wind shear..  With sustained winds around 40 mph she is barely a Tropical Storm but as wave starved as we have been we will take anything.. We are expecting a pulse of energy from this system late Wednesday afternoon through Saturday.. Wave heights generally look to be in the 2′-3′ range….

Two other area of interest are Invest 99L and Invest 90L 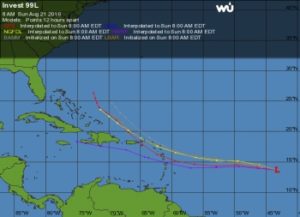 This area of storms is forecast to intensify slowly as it moves towards the Caribbean over the next several days.. 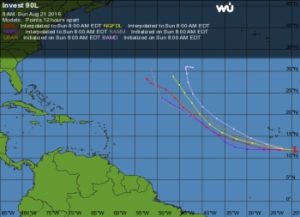 This soon to be storm has me excited… The models have tagged this to be the next Hurricane over the next several days.. With the track towards the middle of the Atlantic it won’t pose any direct risk to life or property but it will send the entire East Coast Swell….  Yes, as early Sunday August 28th the whole East Coast could begin to see SE swell lines hitting the local breaks.. Its really early yet, but who cares its fun to imagine how good it could get…  A week of surf over 5′ sounds really, really good!!

So, it’s Winter… the ocean temps are in the low 40s and many of us begin to think about warmer waves.  A lot of East coast surfers look to the Caribbean to satisfy their thirst for Tropical surf.  The Caribbean is littered with great surf throughout the islands.  This time of year this area thrives off the winter weather systems that move off the Eastern Sea Board of the US.  If you can free-style and fly at the drop of a hat, watch for those cold and windy high pressures that cut deep into the South.  Then hop on a plane, south!

These NW winds associated with these high pressures pump a North ground swell targeting the Caribbean.  Puerto Rico – probably the popular place in the Caribbean.  It is quick, and relatively easy flight from most major East Coast airports.  With the deep waters of the Puerto Rican trench to the North, these North swells grow.  Most spots are clean in the morning, even the North coast.  As the ENE trade winds pick up late morning, people will surf the more Western facing beaches of Rincon as those trades are off shore all day.  Some of the northern beaches include wilderness, ruins and hobos.  In Rincon, you can enjoy Marias, Dogmans and Domes.

So shifting a bit East, you will find the small French island of St. Barthelemy (St. Barts).  Not as surf consistent as Puerto Rico, however getting more than their share of waves.  Although the English language has infiltrated the island,  it is primarily French-speaking.  St. Barts attracts a wide variety of people from many different countries.  This adds an interesting dynamic either on the water or on land.  It is not uncommon to hear more than three different languages while having dinner in a restaurant.  And the cuisine… if you’re a foodie, you will find the French Caribbean infusion to be rather yummy.

Surf wise… the island will pick up the same large ground swells that Puerto Rico does.  However, it will pick up ENE trade swell also.  While there are almost a dozen surf spots on the Island, there are 3 premier waves that come to mind:

TOINY:  On the eastside … Is tucked behind a headland that primarily only breaks on a good sized ground swell.  With the trades blocked by the headland the waves are almost always clean.

L’ORIENT:  A fun reef break on the Central North Coast with multiple peaks.  There is a very hollow peak to the left.  The outer wave on the east side, a right, is called PICKET FENCES because of the Elkhorn coral that resembles a fence … be careful!

While on the island, a must visit is to the small port town of Gustavia .  Keep in mind Columbus visited the island in 1493 with the French and Swiss settling there in the 1700s.  So Gustavia has a great vibe and character littered with high end shops and great restaurants.

When flying, you will connect through St. Maarten in all likelihood.  If you want to take your own board, you’ll have to take the ferry over as the little “puddle jumper” airplanes cannot fit them in cargo.  As the St. Barth airport is so small, and the runway so short and can only accommodate small airplanes.  Bon Surf! 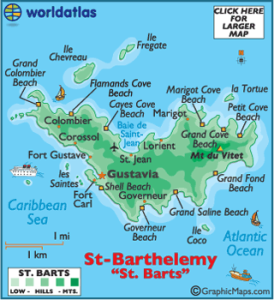 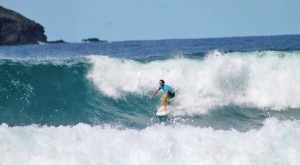 With so many other islands to surf in the Caribbean, it would be remiss by not talking about TORTOLA, in the British Virgin Islands.  “An early flight out of Philadelphia to St. Thomas then onto a fast ferry you can be in the water by 4pm that same day”!  Another quaint island with more than a handful of very good waves… most notable, and regarded by many to be the best wave in the Caribbean when it’s “on,” is CANE GARDEN BAY.

CANE GARDEN BAY is a true right hand point break.  Again, like Puerto Rico, St. Barth and Tortola like those big North swells.  Cane Garden can hold a lot of size with enough swell on the water, it can break for a couple hundred yards.  Apple Bay sometimes called, BOMBA SHACKS, is a fun playful wave with multiple peaks up and down the beach… with longer rights, there are some lefts to be had as well.

A seldom surfer’s left hand point due to access ability is easier by boat would be COOTIINS REEF just adjacent to the more well known JOSIAH’S BAY.  COOTINS needs a fair amount of size to break and can hold a lot of size. 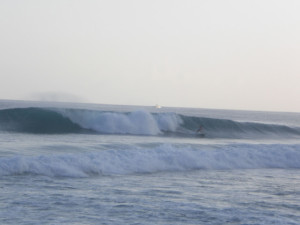 Other spots in the Caribbean:  Barbados, Guadaloupe and St. Maarten (Dutch side being better) and Dominican Republic.

Safe travels and many happy rides! 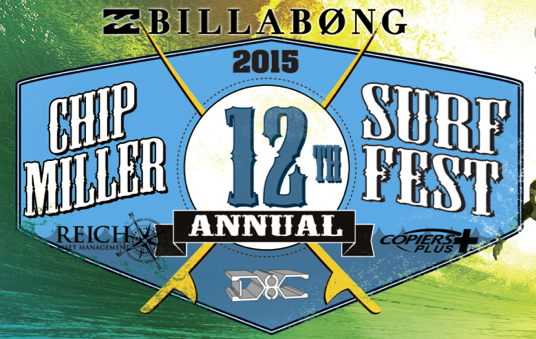